If I were to choose the most iconic bomber of WWII, it would have to be the Boeing B-17 Flying Fortress.

The B-17 is a four-engined heavy bomber that was introduced back in the 1930s and has seen more than 30 years of active service. The primary users of the bomber were the US Army Air Force and the Royal Air Force. Even though it was quickly phased out from the USAAF after the end of WWII, it remained in service in other countries till 1968 when it was retired from service in Brazil.

Several variants of the bomber were introduced with the B-17G and B-17F being the most widely produced. Overall, according to Wikipedia, 12,731 B-17s have been produced.

Perhaps the most famous member of the B-17 family was the B-17F nicknamed “Memphis Belle”, which has completed 25 combat missions and was later used in a war bonds campaign in the US.

Enough of history, for now, let’s have a look at the best plastic model kits of the B-17 which are available on the market. Thanks to the popularity of the subject, there are numerous kits to choose from across different scales. The most popular scale for bombers is the 1/72 scale. That’s mostly because of the sheer size of the real aircraft. Even in the 1/72 scale, the model will be huge. But if 1/72 is still small for you, there are also kits in the 1/48 and 1/32 scales. Be wary though, because the 1/32 scale B-17 will have a wingspan of more than 3 feet long.

Please note that none of the kits are meant for children. They are complicated, contain tiny parts, and require considerable model building skills to build successfully.

Let’s have a look at the kits then. The table below is just an overview of the recommended kits. More inofrmation about the kits can be found further down the page.

As I said earlier, the 1/72 scale offers the most choices. The most popular choices are kits by Revell, Airfix, and possibly Academy. 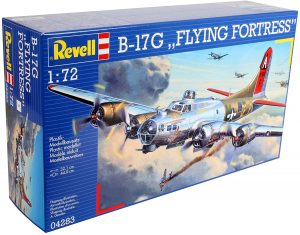 This relatively new kit is comprised of 237 parts on 8 silver plastic sprues and one clear plastic sprue that contains the various windows of the aircraft. The kit is packed in the typical Revell end-opening box, which I personally hate with a passion, because it’s not very sturdy and does not protect the sprues all that well. However, I must note that there were no broken off pieces in either of the 2 kits I got.

The kit has a nicely detailed interior and exterior which both can be spiced up with aftermarket details such as gun barrels, resin engines, or photo-etch parts. The one thing that could perhaps be better is the negative panel lines. They feel a little bit heavy-handed and their width is not consistent in all places.

Overall, it’s a very nice kit with very nice pricing. If you decide to go the Revell route, make sure you are getting this kit or the even newer Memphis Belle package and not one of the older kits which were first introduced in the 1960s.

Check out the awesome job Plasmo did on his B-17: 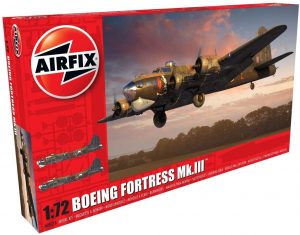 The Airfix kit is even newer than the Revell one, however, it’s not easy to say which one of them is the better one. They both have excellent details and it may come down to one’s preferences of included markings. This kit is focused on the B-17 MK.IIIs which were pretty much the B-17Gs that served with the RAF. If an RAF version is not your cup of tea, Airfix has other versions available as well.

If there’s any part to complaint about with this kit, it would be the somewhat poor fit of some of the clear parts.

The instructions are better than Revell’s. There are 2 markings to choose from, with both featuring the traditional RAF camouflage with a black underside and brown-green topside.

The decals are nicely printed and work absolutely fine. 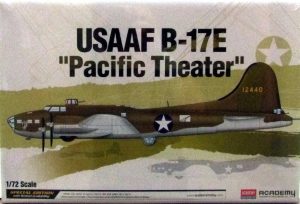 The Academy kit is the oldest one of the three 1/72 scale kits presented here. It was originally released in 1988 and there’s a noticeable difference in the details when compared to the Revell and Airfix kits. The details are simply not as good.

If at all possible, I would go for the Revell or Airfix kit, unless you really want to build a kit with markings included only with the Academy boxing. Namely, this kit is focused on the B-17Es serving in the Pacific theatre which I think is something neither Revell nor Airfix has done yet.

On the other hand, the kit still goes together rather nicely and looks just fine when finished.

There’s not much to choose from really. You’ve got the old Monogram kit, the similarly old Revell B-17F kit, and the brand spanking new HK Models kit ready to choose from. 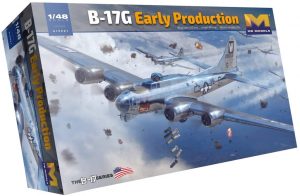 Until 2019, the only 1/48 scale kit of the B-17 that was available was the Revell/Monogram one which was initially released in 1975. That’s a pretty old kit, right?

After the success with their 1/32 scale B-17s, HK Models came up with a smaller 1/48 scale version. This kit offers much better details and fit than the old Monogram kit. However, it’s also three times the price.

The surface details are glorious with thousands of small rivets and panel lines. There’s also a small photo-etch fret that includes seat belts. You can bet that there will be countless aftermarket accessories available soon.

The instructions are pretty clear and easy to follow however for the price, I would expect at least color profile pages to be colored like in the latest Tamiya offerings. But nope. Everything is black and white. Also, for the price, it would be nice to have more than just two markings included with the kit.

Until recently, the Monogram kit was the unrivaled king in the 1/48 scale B-17 kingdom. That changed last year; however, this kit is still worth looking at. Especially, when you compare the price of this kit with the one by HK Models.

The details are reasonable especially when you consider the age of the kit.

There’s also some raised rivet detail in specific places. The panel lines are raised as was the case with kits introduced almost 50 years ago. This may possibly be the biggest downside of the kit and if you hate raised panel lines, just get the new HK Models kit. Of course, you can re-scribe all the panel lines, however, that’s going to be one hell of a job.

Important note: To add some confusion – there’s also an ancient B-17F kit made by Revell (currently boxed as Memphis Belle) which is NOT a re-box of the Monogram’s kit and it’s not as good and lacks interior detail.
Pros
Cons 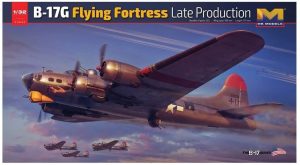 While the kit is well-engineered and made not to be overly difficult to assemble, it will still take a long time to finish. One area that’s pretty annoying on most kits is the ejector pin marks. And these are present here as well. Especially on the interior sidewalls. Some of the pin marks can be left alone as they won’t be seen through the small windows. Others though will have to be dealt with.